The 2020 Nissan Pathfinder Rock Creek Edition finds itself in murky waters these days. New three-row crossovers are popping up left and right, and yet Nissan trots the Pathfinder – at seven model years old – into 2020 with blinders on. A facelift in 2017 and several special editions are the only motions the company is going through to try to keep things fresh. This one, the Rock Creek Edition, found its way into our garage for a week.

In short, the Rock Creek is an appearance package. Nissan dresses up the exterior trim in black paint, covering the mesh grille, roof rails, door handles, mirror caps and license plate finisher. Dark 18-inch wheels (that look a whole lot like the Subaru Crosstrek’s wheels) finish the look. When combined with the porcelain white paint on our tester, the overall effect is low-rent. Paint choice makes a huge difference in how this package looks. It was much more enticing on the dark green show car we saw at the Chicago Auto Show.

The Rock Creek interior changes are similarly minor, yet immediately noticeable. Nissan embroidered the Rock Creek logo onto both the front seats and the floor mats. It’s big enough that you won’t ever miss it stepping into the car, for better or worse. Then, there’s the “premium metallic trim” – a glossy carbon fiber-esque looking plastic material with some orange accents weaved into it, set against hard black plastic – that doesn’t look or feel premium. Wasn’t this stuff supposed to have gone extinct in the early 2010s?

If you were scanning the above thinking we’d left out any mechanical upgrades to the Rock Creek, don’t fret. Your eyes weren’t deceiving you, because there are no mechanical changes to the Rock Creek. Yeah, we’re a bit bummed, too, because the standard Nissan powertrain equipment is middling in this class. A 3.5-liter V6 makes 284 horsepower and 259 pound-feet of torque. That’s good enough to tow a 6,000-pound trailer and earn an EPA rating of 22 mpg combined when equipped with all-wheel drive. Naturally, Nissan pairs the V6 with its CVT that tries its best to mimic gear changes, but still ends up feeling lazy and sloppy. 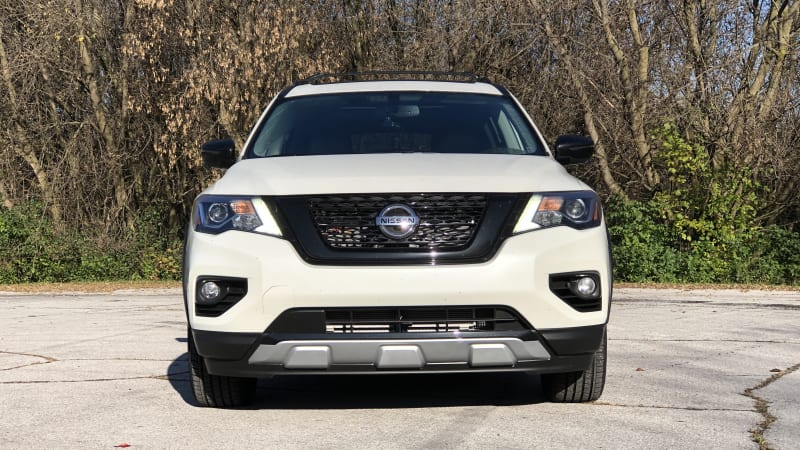 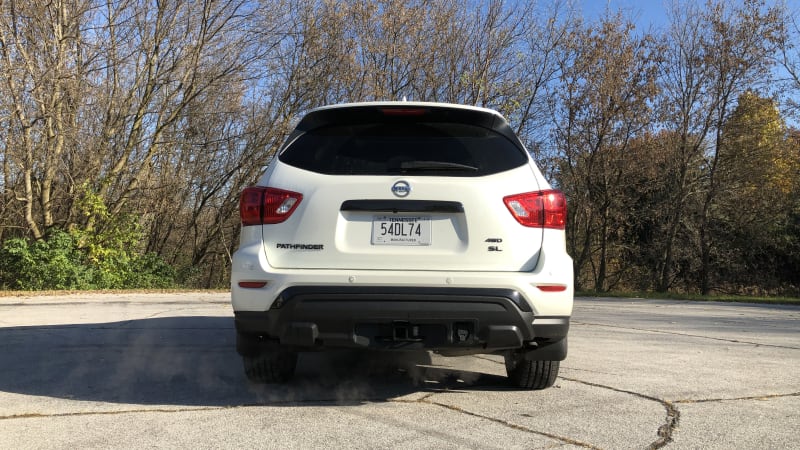 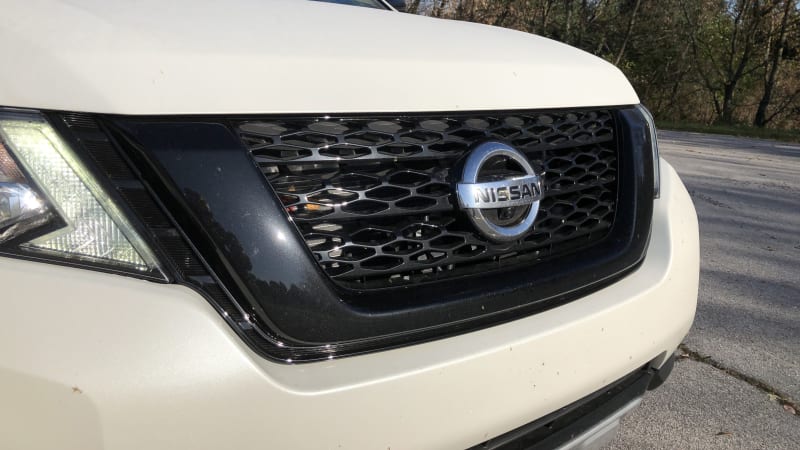 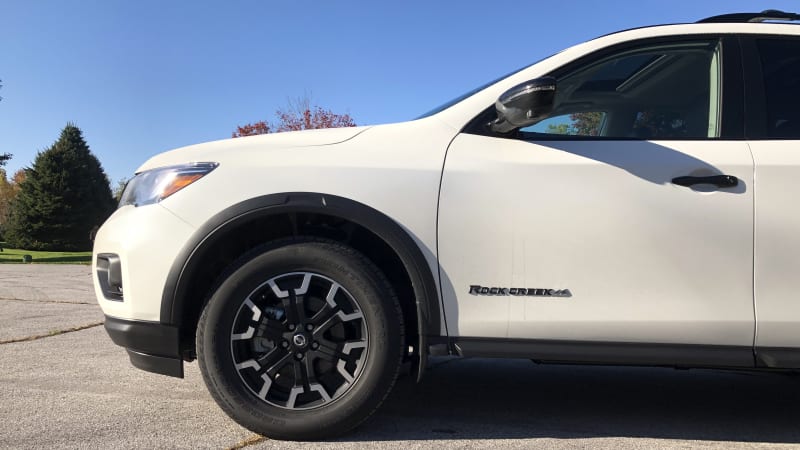 Power is right about on-par with the competition, and so is fuel economy. Towing is on the higher side of its class, and cargo room with the third row lowered is also right there with cars like the Kia Telluride and Ford Explorer. Unfortunately, the Pathfinder has found other ways to let us down, most of them due to its age.

The whole dashboard, center stack and gauge cluster have to go. Stepping into the driver’s seat of the Pathfinder is like stepping right into the heart of the economic recession. The styling hasn’t aged gracefully on this generation of Pathfinder, and the tech does it no favors either. A low-def central infotainment screen can be controlled via a central knob on the center stack, directional arrows on that knob or via the touchscreen itself. It’s a bit ridiculous to control an infotainment screen via arrows nowadays, but the screen is placed just inconveniently far enough away to make the driver uncomfortably reach for it. There is no Apple CarPlay or Android Auto available, but our SL Rock Creek had a navigation system built in. Still, in-car navigation is no excuse to leave Apple CarPlay and Android Auto off the table in a 2020 model year vehicle. None of the menus or settings present themselves with speed, making the entire infotainment experience feel out of touch with today’s technology.

Nissan doesn’t include a digital speedometer in the gauge cluster’s little digital screen — analog only here. The gauges themselves are easy to read at a glance, but as many manufacturers (and Nissan) have learned, cars with CVTs don’t necessarily require half the cluster to be reserved for a tachometer. Climate control buttons and dials are readily accessible on the bottom of the center stack. Thankfully, they’re easy to navigate through, something we can’t say for the maze of buttons splattered up and down the central tower area. Own the car for long enough, and you may enjoy the ease of accessibility to menus with all these buttons, but it feels unnecessarily complex and overwrought to us. Mazda could teach Nissan a thing or two about simple yet functional interiors.

The second-row seat is plenty comfortable and spacious, and it even slides/folds forward easily to allow access to the third row. A simple lever on the seatback sends the whole apparatus forward, leaving a space large enough for even an adult to clamber back into the third row. Putting the seat back up takes a bit more muscle, but it’s not difficult enough to be a deal breaker. Just like the front seats, the rears carry on with the orange contrast stitching. 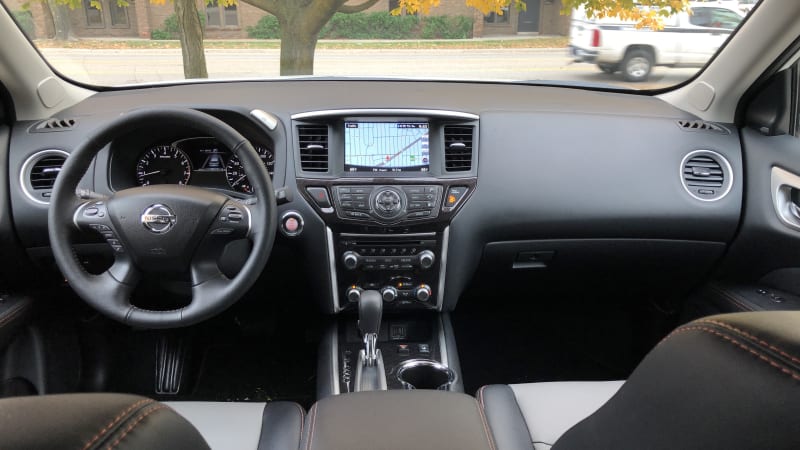 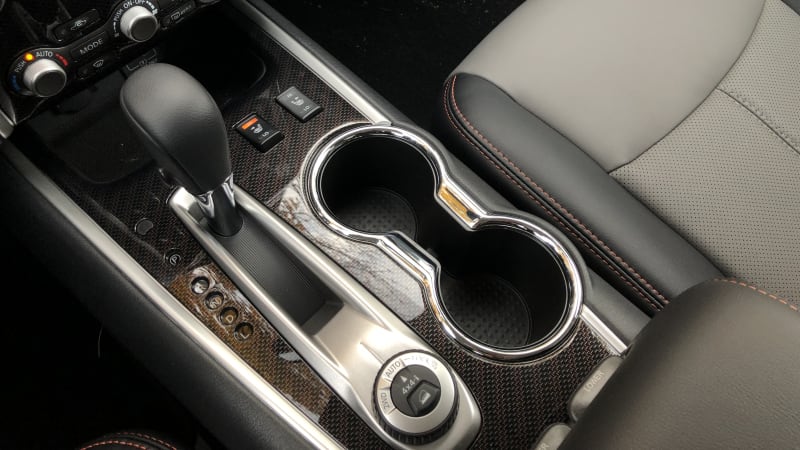 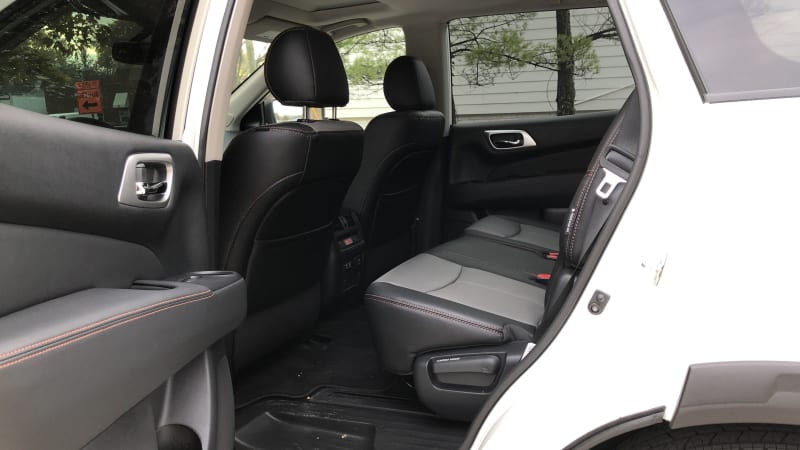 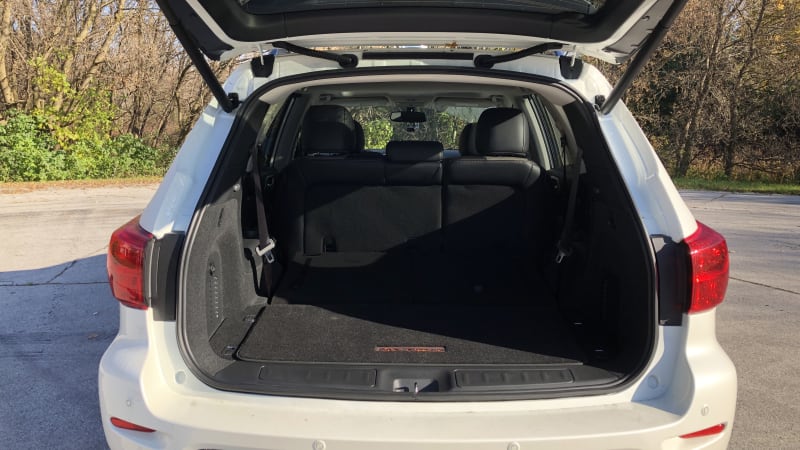 The 2020 Pathfinder also disappoints with its driving experience. Its steering is decidedly artificial and doesn’t provide confident or positive feedback in turns. The steering feel on curves is similar to that of a big SUV with knobby tires and vague road feedback – except the Pathfinder Rock Creek has regular passenger car tires. Then, it’s even more frustrating when navigating parking lots. The wheel is unnecessarily difficult to turn at low speeds, requiring extra strength to wheel about when backing out of a parking spot or making a super low speed maneuver. It’s the opposite of what one would want out of a steering rack when you need to go lock-to-lock in a crowded shopping mall with aggressive shoppers bearing down on your empty parking spot.

Nissan’s V6 and CVT is less concerning, though it’s still inferior compared to most of the competition. Even with a full throttle application from a dead stop, the transmission takes its sweet time getting to the meat of the power band. The revs then pinball about if you keep your foot in it, providing brisk acceleration. Would we rather have a traditional automatic transmission? Sure. Is it necessary for this class of vehicle? Probably not.

I wish I could say the Pathfinder crushes the competition from a pricing perspective, but there’s nothing doing here either. A base front-wheel drive S starts at $32,725, comparable to most other SUVs in this segment. Ours had a final price of $45,425 on it, which didn’t even come close to feeling like a value play. The Rock Creek Edition with the Premium Package does get you a couple pieces of equipment from the Platinum trim that are otherwise unavailable on the SL. Pay the $2,110, and Nissan throws in a dual panoramic sunroof and 13-speaker Bose audio system, but it’s still too much money. We’ll bet Nissan would be willing to strike a deal with you, whereas a new Explorer or Palisade is far less likely to receive a comparable discount.

We can’t and won’t fault anyone for liking the way this package looks, but we certainly don’t feel like it makes the aging Pathfinder any fresher or more competitive. What would is a brand-new model, built from the ground up for current market conditions. If you’re able to afford something other than a deeply incentivized Pathfinder, please do explore some other options.